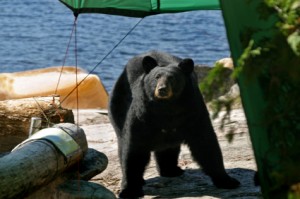 Crrrraaaaack! The sound of a breaking tree branch exploded into the silence of the night. We were camping in the Canadian wilderness. My girlfriend whispered, “Did you hear that?” “Yes,” I answered. “Are you afraid?” she asked. “No,” I lied. Then she said the seven little words that every man hates. “Go outside and see what it is.” I nervously opened the zipper of the tent armed with only a little flashlight. There to my right was the cutest little baby bear you have ever seen. “Growl, growl, growl,” its little bear cub voice called out. I was just thinking to myself that this will make a great humorous speech story when the loud angry sound of Mummy Bear roaring, “Growl, growl, growl!” came from my other side. Mummy Bear was on my left, Baby Bear was on my right and I, “dinner”, was in between.

Do you know how some people can face danger and do incredibly brave things with adrenaline pouring into their bloodstreams? That never happened to me! I flung the flashlight at the mommy bear, causing her to rear up even higher, and ran and climbed a tree shouting out, “A bear, a bear, run for your life!”

The bear shook the tree angrily, validating the saying that when Mummy Bear ain’t happy, ain’t nobody happy. While the tree was swaying like a pendulum, my brain was saying, “Climb higher!” My stomach was saying, “Jump and run!” And my bladder was saying, “Evacuate!” As I was evacuating, I fell from the tree, rolled towards the fireplace, and instinctively grabbed a piece of wood to use as a weapon. Out of my mouth came a blood curdling scream, “Ahhhhhhh!” My girlfriend peered through the zipper of the tent just in time to see Mummy Bear and the cub run into the forest.

Christine is now my wife, and she still wonders how someone my size can be so brave to take on a bear. Between you and me, when I picked up that piece of wood, I felt fear, I felt anger, I felt…the searing red hot embers burning into the palms of my hand from the still smoldering piece of wood!

The Humor Rule of Three – Simple and Highly Effective Ways to Develop Humor:
The humorous speech excerpt above is from an award winning speech I delivered in 2008 to an audience of about 200 people. I will use this speech as an example of the effectiveness of the humor rule of three. The focus is on the sections that are in bold above.

So what is the Humor Rule-of-Three and why is it so Effective?
The human brain finds it easy to process information that is presented in groups of three. For example, in a race they shout out, “Ready, get set, go!” From a presenter’s point of view, you often see PowerPoint presentations showing information in groups of three bullet points.

The humor rule-of-three sets a pattern that follows the formula set-up, set-up, twist, or set-up, anticipation, twist. What gets laughter is that basically you are fooling the audience’s brains. The first two setups get the brain rationalizing in a certain direction. The brain, which is thinking ahead, automatically tries to come up with the third item before you say it. When your twist is totally off in another direction, the audience responds with laughter.

The humor rule-of-three in the speech excerpt above is demonstrated in the four sections as follows:

Example 2: (Set-up #1 Do you know how some people can face danger and (Set-up #2) do incredibly brave things with adrenaline pouring into their bloodstreams? (Twist #3) That never happened to me!

Example 4: (Set-up #1) I felt fear, (Set-up #2)I felt anger, I felt…(Twist #3) the searing red hot embers burning into the palms of my hand from the still smoldering piece of wood!

The bear attack story showing these four examples and the audience’s reaction can be viewed on my YouTube Video Channel (5 minutes): http://www.youtube.com/watch?v=ZuuWYBSnfHY

A video clip illustrating the rule-of-three in three different stories can also be viewed on my YouTube Video Channel (2 minutes): http://www.youtube.com/watch?v=6c4z1TKgFy8&playnext=1&videos=ET5k_3EM39M&feature=mfu_in_order

How to Practically Use this Technique:
The rule-of-three is one of the simplest and most effective humor techniques to use. As I am writing out my stories and honing them, I am looking out for areas where I am describing multiple items, where humor would benefit from the 1, 2, and 3 structure. Once I identify sentenses where this is possible, I then spend a lot of time determining what would be an effective twist.

In my efforts to maximize the effectiveness of a story, I often spend hours trying to find a suitable twist, I am thinking about the sentence 1) when I am walking my dog, 2) when I am driving my car, 3) when I am… (You fill in the blank with a humor twist! What would be an absurd thing to be doing while thinking of a humor twist?). To focus in on finding the most effective twist, I look at the sentence and I see movement (walking, driving) as a common trend. I now would try and structure the sentence so that the movement would be in a natural progression to move the audience’s brains in a certain direction (walk, jog, run). The sentence would now easily evolve to something like this:

“In my efforts to maximize the effectiveness of a story I often spend hours finding a suitable twist, I am thinking about the sentence 1) when I am walking my dog, 2) when I am jogging, 3) when I am running…”
I am now going to focus the twist on something that will relate to running. The kind of things that I will consider include; running from the IRS, running to the bathroom, running to the pub before it closes. None of these are exceptional, but with enough analysis time, something will eventually emerge.

The time invested in this process may seem excessive but when you get the audience’s laughter it is well worth the effort. Once you find sentences that work, you can add them to your library of tried and tested humor which can be used more than once.

Final Note:
Example #3 above is one of my favorite as it also included a play on words which complimented the rule-of-three humor. Once I identified that I was going to have three organs giving me “advice”, I stumbled upon the double entendre use of the word “evacuate” with relation to the bladder.