What Mommy Bear, Baby Bear, and an Irishman In-Between Can Teach Us about Using Dialogue to Enhance Stories 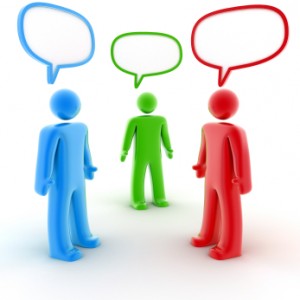 Imagine you are giving a speech which incorporates one of your favorite personal stories. You can feel the audience’s energy as they move from scene to scene with you. They have become part of your story and are experiencing conflict, tension, fear, and triumph.

In 2004, I stood in front of an audience of over 2000 people to deliver a speech at the World Championship of Public Speaking in Reno, Nevada. There are four things I recall from this event:
1) I could not believe the never- ending, ocean- size audience at that event. The room seemed to go on forever. The biggest audience I had spoken in front of prior to that was in the range of 200 people.
2) The next thing that took me by surprise was the lighting. There were film crews at the event, and the lighting had been maximized to incorporate their technical needs. When I stood on the stage to deliver my speech, it was like looking into the sun. Only the first few rows of audience were actually visible to me.
3) When I was just about to step on the stage to deliver my speech, a voice said, “Please make sure your fly is closed.” The event organizers had assigned someone to make sure that there were no wardrobe malfunctions. They wanted us all to deliver our best speech, and understood that in the stress of the moment, an open fly can easily get overlooked. That’s attention to detail in my opinion!
4) The other recollection is that this was the year I started using dialogue more effectively in my stories. I was being coached by David Brooks who was the World Championship of Public Speaking winner in 1990. He was the person who helped me understand the benefits of bringing a story scene to life by setting it in the present tense with concise dialogue.

Here is an excerpt of a humorous story I developed in 2008. This will give you an idea of how I maximize dialogue.

“CRRRRRACK” the sound of a breaking tree branch exploded into the silence of the night outside our tent. My girlfriend whispered, “Did you hear that!” “Yes!” I answered. “Are you afraid?” she asked. “No!” I lied. Then she said the seven little words that every man hates. “Go outside and see what it is.” I unzipped the tent, armed with only a key-chain size flashlight. I stepped outside, and there to my right… was the cutest little baby bear! “Growl, growl, growl.” I was just thinking to myself that this will make a great humorous speech story, when “GROWL, GROWL, GROWL,” came from my other side. Mommy Bear on my left, Baby Bear on my right, and me, (Dinner) in between. That’s a bad thing.

Do you know how young men can face danger and do incredibly brave things with adrenaline pouring into their bloodstreams?… That didn’t happen to me! I flung the flashlight at mommy bear, causing her to rear up. I ran and climbed a tree shouting out, “Christine, a bear, a bear, run for your life, it has the flashlight!”

In all the different parts of this story, I am taking on the persona of the characters with vocal variety, energy, volume, facial expressions, gestures, movement, and, most importantly, I take on the accents of the characters.

How Can You Use Dialogue Effectively in Your Stories?
1. Practice using different men’s/women’s voices and accents
2. Study different accents to get a feel for the pronunciations and expressions (go to YouTube and type in “French accent”, “English accent”, or “German female accent” to get voice training videos etc.). Here is a link to a woman doing 21 accents in 2 ½ minutes http://www.youtube.com/watch?v=3UgpfSp2t6k&feature=fvw
3. Take on the persona of the person (or animal etc.) you are portraying (facial expressions, gestures, voice, energy, expressions etc.).
4. Characterize the emotions of the characters and portray appropriate levels of fear, mirth, anxiety, etc.
5. Keep the dialogue natural and fluent. It should feel comfortable to you, and should not be too wordy.
6. Compliment your story with a combination of visual details and physical descriptions. Keep it believable.
7. Think about your dialogue tag lines; watch out for overuse of “he said, she said” among other common dialogue beginners. Use narrative sentences to describe the character’s immediate actions, location, etc. Note the lack of “he said, she said” in the bear story example at the beginning.
8. Practice, practice, practice, and have fun portraying your characters.