My Family Survived A Tidal Wave 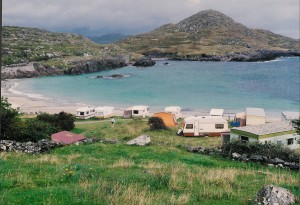 “My family survived a tidal wave.” Some of you may have already created a mental image of what this involves. Clear that image; it is many times worse than you can ever imagine. I also suggest that if you are eating that you finish right now.

I come from a family of six, and when I was growing up, our family used to go camping at a spectacular place called Glenbeg in County Kerry on the West coast of Ireland. We went there for about 15 summers with the trailer (caravan) situated literally feet from the beach.

Let me take you to our vacation trailer back in 1966. In the background of the picture above is Glenbeg showing the Atlantic Ocean, Tick Mountain, and a small sandy beach. The trailer windows allowed full view of this awesome scenery. There was a small gas stove in the center that was used for cooking food and drying underwear. There was an entry door at the far end of the trailer and next to it was a closet door which contained the chemical toilet. For those that do not know what a chemical toilet is – it is basically a forty gallon sturdy plastic bucket, into which you put a few pints of dark blue, extremely strong smelling air-freshener-type liquid chemical called Elsan – this is then diluted with a few gallons of water. The bucket has a toilet seat clipped onto it to for “comfort”. The rationale behind all this is that it only needs to be emptied into the campsite sewage pit every couple of days. Sounds like a crude design that could be improved on? Of course it is, but people who camp do without a lot of luxuries and anyways, this was a small sacrifice to be camping in this beautiful part of the country and so close to the beach.

On the fateful morning that would leave images engrained in our minds that even deep hypnosis could not remove, we woke up and went through the process of rearranging the beds so that it would be set up for our family of six to have breakfast together. We organized ourselves as best as we could in the small space; the morning was a busy time for a 16 foot long trailer with 6 people. We eventually put the nighttime setting away, the breakfast table was set up, and we all sat down for breakfast with the dog in his usual position at the end of the table with strings of drool hanging from his mouth, begging for buttered toast.

At some stage, my 4 year old brother Nigel excused himself from the table to go to the chemical toilet. Nobody took any notice, but soon we heard him singing his favorite song: “Oh Danny Boy, the pipes, the pipes are calling,” Does it get any better than this you could ask? The mountains, the beach the ocean, hot tea, buttered toast, and children singing. Little did we know that while he was sitting on the chemical toilet, he was also rocking it to the rhythm of his angelic voice.

Suddenly, with a noise as loud as a clap of thunder directly over a house, the closet door flew open, and the latch ripped from its mounting. My brother had rocked the bucket too far while reaching for the famous Danny Boy song high note with his soprano choir boy vocal cords. The forty gallon chemical toilet had been tilted too far and had slid on the linoleum floor, toppled over and literally ejected him. He was thrown out from the closet and lay on the floor, naked and helpless with his underwear at his ankles preventing him from getting up. In the next split second, the contents of the overturned chemical toilet (which was on day four and due to be emptied into the campsite sewage pit that morning), followed him. A giant dark blue tidal wave swept up the trailer floor towards us, slowing down briefly as it parted around the torso of my panic stricken wriggling brother Nigel. He appeared to be doing an impersonation of a live fish helplessly flapping about in the bottom of a boat.

The dog, sensing danger a split second before us, did an amazing jump up onto a seat and simultaneously went out the open side window with the same agility as an Olympic high jump athlete. We saw him run down the beach, never looking back.

The next few seconds I remember in slow motion…my mother shouting “Jesus, Mary and Joseph and the Saints protect us” before her motherly instinct made her run to the rescue of my brother Nigel, first grabbing her packet of cigarettes and lighter, then grabbing him around the waist, exiting the door without missing a step. I remember her running on her tip toes through the dark blue liquid mess like a swan walking on water during final take off from a pond. I recall my father sitting there his face furrowed with confusion; his reactions hadn’t kicked in yet. He hadn’t had his first cup of tea and his caffeine deprived brain was not capable of making the required split second decisions. We kids sat dumbfounded – mouths wide open – our instincts were to immediately lift our legs, but unfortunately a knee hit the table and dislodged it from its supporting nylon groove and it went crashing to the floor with all the breakfast dishes. A steam cloud drifted from the broken tea-pot as the blue tidal wave enveloped it. As we sat holding our legs off the ground looking pitifully for guidance from our dad, I remember him lifting us one by one and helping us evacuate through the front window. As he lifted us I remember his pre-vomit retching, and tears running down his face. A crowd of fellow campers started gathering outside our caravan to see what all the commotion was about. They were worried we might have had a gas leak.

At the end of the summer, we sold the caravan for a bargain price. The buyer was very happy with the deal he got. The family stood quietly watching him as he handed over the money. We had a secret that he didn’t know about. To us, this was the equivalent of someone buying a house without knowing that it had been involved in a horrific murder.

Toilet Humor – Cautions for Presenters:
The chemical toilet story above leads into an important perspective I would like to share. Every now and then I get to witness a presenter using toilet humor. The results are typically the same. There is sometimes a polite groan from some people in the audience, and some hesitant or nervous laughter amongst a sprinkling of people who might have found it somewhat funny.

Wikipedia defines toilet humor, or scatological humor, as a type of off-color humor dealing with defecation, urination, flatulence, vomiting, and other bodily functions.

It is important to understand that public reference to bodily functions is taboo in many cultures, and as a presenter you run the risk of being noticed in a very negative way.

As a storyteller and humorist I have a plethora of material to choose from and I analyze my audiences to understand what kind of humor will work best. I would never deliver material to an audience with the knowledge that I would potentially upset or embarrass anyone.