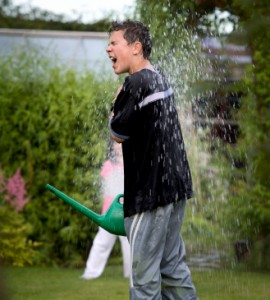 It was June 16th, 1978, and summer had finally arrived in Ireland. The warm sunshine was piercing the shadow of our garden trees and shining brightly on the grass. Lying on the ground was my younger brother Nigel; he was the picture of peacefulness as he dozed in the early afternoon. I crept over to him with mischief in mind; I could see that he was totally out of it in a deep slumber lying on his back. A wicked smile came to my face as I formulated a plan to destroy the pristine and picture perfect setting. The boredom of my day was literally going to explode into action.

I tiptoed back to the side wall of the house where a garden hose was curled up. I opened up the tap to run the water to feel how cold it was, and fill it completely. In Ireland, the cool climate keeps the tap water temperature somewhere in the 50 degrees Fahrenheit range, plenty cold enough for my purposes. I shut the tap off.

I gently and quietly uncoiled the hose so that I could drag it unnoticed. I tip-toed barefoot along the grass while silently pulling the open ended garden hose. My heart beat loudly as I got closer to my brother. The smile on my face was at the point of beaming as I envisioned the outcome of my brilliant plan. Being a mischievous teenager was so much fun.

With the hose in hand I stooped down to where the lower leg seam of my brother’s shorts was exposed. There was a bit of a gap which allowed me to gently insert the hose a few inches without touching his skin. I also placed a nearby small rock on the hose a few feet from the open end to prevent it from dislodging from the force of the water.

Back at the side wall of the house where the ¼ turn tap handle was, I peered around the corner, ready to put my plan into action. Being at the side of the house, I would be hidden from my brother’s line of sight. In a swift move, I fully opened the tap and the hose snorted as the water cascaded through. I gazed around the corner to get a view of the turmoil, and suddenly my brother’s shorts exploded into a tsunami of freezing cold water. His reactions appeared to go into slow motion; his body first appeared to levitate horizontally. With a confused look on his face, his sleepy brain tried to work out what was happening. As he stood up, the hose fell from the leg of his shorts and he noticed my grinning face peering from around the corner in the distance. With his hysterical screams, shouts, and fists clenched tightly, this was not to have a happy ending for me.

I am now 50 years old. I still have a strong sense of humor and mischief; however, I have grown to understand that there is a line of acceptable behavior. This also translates into using humor in presentations. I coach people to analyze the audience they will be presenting to and make sure that the humor is appropriate for the occasion and the audience. I use humor in nearly every presentation I conduct, whether it is a funny story that illuminates a point, or to provide entertainment and information retention when conducting technical training. Humor is such a powerful tool that it is well worth the effort to learn how to develop it and to incorporate it into speeches and presentations. In the professional speaking world, there is a question and answer that gives a clear indication of the benefits:
Question: Do I need to use stories and humor in my presentations?
Answer: No…..you only need to use stories and humor if you want to get paid!

Humor can help you form a bond with the audience and help them relax. The added benefits are that it can help illuminate your point to make it understandable and help retention. Imagine how good it feels to have someone come up to you and say, “I remember you- you told the hilarious story about….. when you presented to my group several years ago.”

A short video clip example of me making fun of myself during a presentation can be viewed at http://www.youtube.com/user/davehillspeaks#p/c/3A2ECDC9F2DC20E2/1/Bq0a4ybDtbE. Notice the audience reaction.

Engage your audience by making fun of yourself:
1. Humor is a powerful tool to use in all speaking occasions. One of the most important considerations as a presenter should be to asking the question “Is the humor appropriate for the audience and the occasion?” I highly recommend analyzing your audience to the extent that is practical and feasible. It can be beneficial to interview people to find out what is topical, what subjects are off limits, and to get some feedback on the humor you are considering using. Building your instinct to be able to determine when to use humor is critical for success. The humor instinct comes with experience and thoughtfulness.

While coaching a woman for a huge California event where she would be speaking to over 1000 of her peers, a question came up regarding the use of a line of risqué humor she had written. She really wanted to include levity in her presentation but was in two minds about using what she had written. She had been advised by friends to give it a shot. I asked her about the audience, how well she knew them, what percentage of men to women, age group, purpose of the event, what she was trying to achieve at the event, etc. It became very clear that this event, if done properly could build her credibility and her business. The humor line she was considering using was not exceptional, in fact it was at the pun level. The end result was that I recommended she leave it out. She did not know everyone in the audience, the pun could easily be taken badly, it could reflect on her professionalism, and it could have a significant impact on the potential growth of her business. Just because some people laugh does not necessarily make the humor appropriate. We have all been in a situation where someone told a joke or story where there were some groans of laughter, but in our minds, we silently considered it inappropriate and we viewed the person telling it negatively.
2. As a short, fat, bald Irishman who speaks with an Irish accent, let me tell you that the safest humor is typically making fun of yourself. This is also a great way to warm up an audience and start them laughing. Audiences are very comfortable laughing at someone who is making fun of themselves. If you are making fun of others, people may be hesitant to laugh and decide to wait and see if others will laugh first (particularly smaller audiences). If you do not have a few instinctive laughers (the kind of people who are typically first to laugh and do it instinctively) then you may just get silence or token groans.

One of the best examples I have seen of someone poking fun at themselves and getting the audience rolling with laughter was at a corporate office meeting. The morning presentation was interrupted upon arrival of a sandwich lunch, which was laid out on a table outside the conference room. As everyone ate their lunch, the out of place, loud beeping sound of a truck reversing penetrated the room. Accompanied by this noise was a coworker walking through the door slowly, in reverse, with his plate overflowing with food. With a big smile on his face, the people in the conference room spontaneously erupted into laughter. The 300+ lb. coworker had recently acquired a two-way radio that hung on his belt and came with a choice of emergency sounds. His sense of humor was spot-on, and I will never forget this hilarious scene. It has been several years since this event; however, I still find myself talking about it several times a year.