How a Day of Humiliation Changed My Career Path 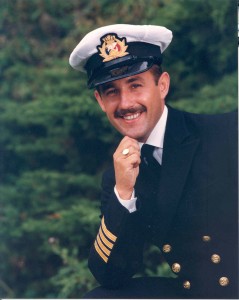 In February 1977, I was getting ready to graduate high school in Ireland, and was pursuing a career as an officer on cargo ships. I was still trying to determine if I wanted to be a deck officer or an engineer officer. I was leaning towards becoming an engineer officer, but I wanted to keep my options open as the job market was very tight. One cargo ship company I had contacted to enter their cadetship program was interested in sponsoring me and sending me to college with a full scholarship- as long as I graduated with certain grades and passed the interview and medical tests. I had to travel to England by ferry and train to go to the company headquarters in London.

It didn’t take too long for things to go wrong. The ferry pulled away from the Irish port, turned the corner into the Irish Sea, and immediately entered the turbulent ocean. My parents had fed me a full fried Irish breakfast, and I stood on the upper deck looking over the side of the ship, feeling miserable. The salty saliva built up in my mouth, and it was inevitable that the fish were going to eat well that morning! Before a ship leaves port they give you the safety instructions for lifejackets and lifeboats, but for some reason they never told us that you should never vomit while facing the wind. My projectile vomit hit the wind head on, the updraft caught it, and the next minute I could hear the cries of disgusted passengers evacuating the deck. I had not even graduated high school and I had already entered a world where curse words were being hurled at me. I would like to say that this was the only bad thing to happen on this journey, but it was only a taste of the humiliation that was to come.

I arrived at the London office and was escorted high up into the corporate building by a porter who was immaculately dressed in a uniform that included white gloves. In a waiting room there were other young people waiting to be interviewed and get a medical test. We were served hot tea by the company “tea ladies” who served tea on the company’s fine china. I remember these motherly type women being very friendly and talkative, helping distract us from our stresses. On the walls of the room were photos of huge ocean going square rig sailing ships. The shipping company had been in business for over 200 years, way back to the sailing ship days. The only disturbing thing I found in this room were little notes on the bottom of some pictures that told of the ship in the picture being “lost at sea with all hands”.

My turn to get interviewed came, and it went very well. I was then brought to another room where the company doctor was doing the tests. It was my first time peeing in a cup, and he was visibly amused when I walked out of the bathroom very slowly and deliberately holding my urine cup filled to the very brim. When you give your first urine sample, someone needs to tell you that you don’t need to fill it all the way to the top! By now, you would think that that was enough humiliation for the day but no…bad things seem to happen in threes.

The last test the doctor had to conduct was called the “Farnsworth Lantern Test”. It is used to test ship deck officers and airline pilots for color blindness. It consisted of a lantern that shone two vertically orientated pinprick size dots of light from behind me. The alternating red, green and white pinprick dots of light from the lantern shone into a mirror located in front of me and I had to read the reflected colors from top to bottom. The color selections were alternated to determine the possibility of color blindness and the ability to see ship navigation lights which are red, green and white. The test instructions sounded easier than giving a urine sample, the lights were turned out, the lantern was switched on, and the medical officer asked me to read the colors from top to bottom. There was an uncomfortable silence in the room as my eyes probed the darkness for any lights. The medical officer repeated his request and after a few more minutes of silence I told him in a stress filled voice that I could not see any lights what so ever. He changed the light combination and asked me again to read the colors from top to bottom. Nothing…I could see nothing. The room lights were turned on, and then the medical officer left the room leaving me standing there extremely worried.

I was surprised when he returned with a smile on his face carrying three large telephone directories. He put them on the ground where I was located and told me to step up on them. He explained that the reason I could not see any lights was probably because I was too short for the mirror to be able to reflect the pinprick dots of colors directly into my eyes. The room lights were turned out and I was happy that I could now see the pinprick lights. Unfortunately, my ability to determine the colors of each dot of light was impaired- the reds and greens seemed to float together and as I could not consistently make them out, I was officially color blind.

That day I had suffered the humiliation of projectile vomiting, had found out that I was color blind, was laughed at for filling my urine cup too full, and you would think that that was enough for one day. The doctor shook his head, laughed, and said, “Don’t worry about the color blindness; you are probably too short to be able to see out the ship bridge windows anyway!”

So that was how I made my mind up to become an engineer officer rather than a deck officer, and I am glad to say that even though I got more than my fair share of humiliation that day, destiny made a good choice for me.

Let me use the learnings from this day to lead into color considerations for visual presentations such as PowerPoint. Many people are colorblind, the most prominent being the inability to distinguish the red-green hues. A small percentage of people have difficulty distinguishing yellow and blue hues. Research shows that about 8% to 10% of males and about 0.5% of females have some forms of red-green color blindness.

Success Strategies for Presenting Using Visual Color:
1. Research colors and make sure that are not prominent for the different types of color blindness (particularly red-green and blue-yellow)
2. Test your presentation to see what the colors look like (remember that they may look slightly different on different projectors). Test your presentation on the projector you will be using if possible
3. My preference for background colors in order of preference is blue, purple and green. Use bold colors
4. Do not use color alone to convey content. Shading styles and other visual cues such as asterisks or line types (dash, dotted, full etc.) can help audiences see and understand the relationships
5. A tool to check how your presentation slides would look to people with different types of color blindness is at http://www.vischeck.com/vischeck/vischeckImage.php
6. Use color sparingly – i.e. don’t overload with too much visual multi-color clutter
7. Find the balance between professionalism and pleasant appearance