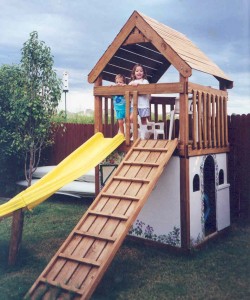 Back in July 2000, my wife and I decided to build a large wooden fort in our back garden for our young kids. The cost of a fort “kit” was well over $1300, which was well beyond our means. As a frugal Irishman I would never be able to convince myself to spend that kind of money anyway. The next best thing was to do some reverse engineering and build it ourselves. It would be a great weekend project. On the way home from work each day, I would pass a store that sold garden forts, and they had a beautiful fully assembled one in the front parking lot as a display. Every day for about a month I would stop for about 10 minutes, pretending to check it out, and then covertly take out my tape measure and measure up a few parts and enter them with diagrams into a small note book. The reverse- engineered plagiarized design started to come together slowly but surely, and soon we were ready to buy the materials.

We arrived at the local hardware store in our old Ford Escort station wagon to choose the best pieces of wood from the lumber section and bring them home. By the time the wood was loaded in the car, it was weighed down to a level where the exhaust pipe was nearly scraping the ground. There were big sheets of plywood and a plastic slide tied with rope to the roof, and the 4 x 4 pieces of wood were stacked thickly in the body of the station wagon. We drove home carefully, making sure we did not lose any of our precious cargo. When we arrived home, our young kids were elated with the thought of having a wooden play fort. This was going to be a great weekend….or was it?

That weekend there were noises of bits of wood being cut, nails being hammered, and the grunts and groans of hundreds of screws being inserted into the structure. Bit by bit it started to take shape. At some stage during the assembly, I discovered that I had miscounted the amount of 4 x 4’s I needed for the frame. Since I was in the middle of assembling, I asked my wife to go back to the hardware store and get a 10 ft. length.

The total cost of this play fort was going to come in under $300, and we were having a fine time “barn-raising” as a family, putting it together. It is always a good day when you can apply your engineering skills to some home projects and get to stand back and admire the workmanship and revel in the cost savings.

The fort was finally finished on the Sunday evening. My wife put the finishing touches to it by painting vines on the sides using the light of a lamp she had brought from the living room. Immediately there were shrieks of joy from our kids as they climbed, chased each other, and slid down the slide. The negativity of the broken windshield became a nuisance of the past, and I put the memory in my story file to use at a later date.

As an engineer of nearly 30 years, I have made my fair share of mistakes while doing projects. I have been lucky that I have nearly always been surrounded by positive, uplifting people and have grown to learn that mistakes are normal and part of gaining experience, but most importantly, they are things you get over and sometimes you even get to laugh at them. I have been at meetings where we were wrapping up projects and celebrating our success with a special lunch. Sometimes the meetings would include a segment to encourage people to talk about what went wrong. People would talk about improvement opportunities for the next project. Occasionally, there would be a competition and gag prizes for the person who confessed to causing the biggest mishap. Not only did this help diminish the embarrassment of making mistakes using lighthearted humor, it also provided a forum where people could learn from each other’s mistakes.

A positive forum for learning from mistakes is highly beneficial to any organization. The benefits can include:
1. Creating a culture where people openly admit mistakes and are not afraid to let others know (rather than keeping quiet and hoping that the mistake does not get noticed or lead to adverse conditions such as an accident)
2. Giving us the opportunity to do things differently and benefit from the results- Albert Einstein once said, “The definition of insanity is doing the same thing over and over again and expecting different results.”
3. Building morale and improving teamwork and camaraderie by diminishing the negativity associated with errors
4. Inspiring people to set far reaching goals and push the limits of technology without the hindrance of career limiting reprimands