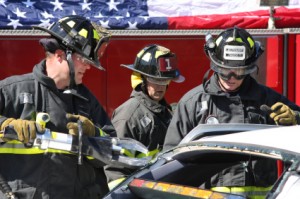 Do you ever stop to think about the exceptional people who are in your circle of friends, acquaintances, neighbors, and workmates? Who are the people who inspire, motivate, and help move you forward in your life? This article is to recognize a few people and to highlight the importance of having exceptional human beings surrounding you.

It was an early Saturday morning in May, 2004. I was at the sideline cheering on my son who was playing soccer. One of the other parents, a policeman called Joel, arrived very late with his son, and I saw that he looked stressed. I asked him what was up. Joel said that he had been rushing all morning and was a few miles from the soccer pitch when he saw a bad car wreck on the side of the road. The emergency vehicles were already there, lights flashing and cordoning off the crash area. Joel saw that a car and a cement truck had been in collision. He was off duty and rushing to get his son to the soccer game on time, but his instinct told him he should stop and see if he could help out. His voice was stressed and emotional when he said, “Dave, I am so glad I stopped. I was able to hold the hand of the young woman in the car, and comfort her… as she died.” Even though I have not seen him in years, I will never forget him and his kindness.

Fast forward to this Christmas and my elderly, jolly neighbor Jerry is at our house having dinner. He is one of those exceptional people who are “wired” to help others. To give you some recent examples, he noticed our house gutter drain pipe had blown down and he “took care of it”. I had a dead tree in my front garden, and he cut it down for me and even removed all the limbs and branches to the local recycling depot. When he clears leaves in the fall, he usually clears leaves from numerous houses on each side of his own without prompt. When my wife came back to the house one day, and found the back door open while I was on a business trip, our good neighbor checked the house room by room for any possible lurking thieves. When he visited his daughter before Christmas, he drove to Ohio from Dallas loaded up with tools to help renovate her house.
While at our table, he said something that impacted me. He told us that he had been at the Lowe’s hardware store that day and was wearing his baseball cap that had a small worn US Army emblem. A stranger stopped him and asked, “Did you serve in the forces?” My neighbor answered, “Yes,” and the stranger handed him a gift card for $25, and said, “I would like to give you this as a small token to thank you for serving your country.” The stranger then walked away. My neighbor stated, “You know, I served two terms in Vietnam over 40 years ago, and that stranger was the first person to ever thank me.” What a terrific act of kindness.

In my own world, I think about people who have been “guiding lights” and forces to help encourage me and help me succeed in life. People who have the positive spirit and can see their way through any turmoil. People who have spirit and can find happiness and positive energy wherever they go. Mentors, who have pushed, challenged, and encouraged me, many times making me take uncomfortable steps to force me to stretch my capability. Strangers who have interacted with me and help me see the good in the world.

Having worked for nearly 30 years, I understand the importance of companies hiring not only experts, leaders, and exceptional communicators, but good human beings who are trustworthy and who will instill an aura of positive energy that will motivate others.

Albert Einstein wrote:
“The ideas that have lighted my way and, time after time, have given me new courage to face life cheerfully have been Kindness, Beauty, and Truth”.

Some Traits of Exceptional Employees:
1. Inherent positive attitude
2. Impeccable ethics and can be trusted
3. Open door policy where direct reports can discuss problems
4. Invites feedback and encourages people to speak with candor
5. Strong, healthy sense of humor
6. Exceptional communicators trained in skills such as negotiation, listening, and conflict management
7. Makes friends at work
8. Values work-home balance
9. Treats fellow workers as human beings rather than “just employees”
10. Recognizes and rewards direct reports at every opportunity
11. Coaches and mentors
12. Leads by example