Energized Employees Power Your Profits – Listening Skills….Hear Me Out 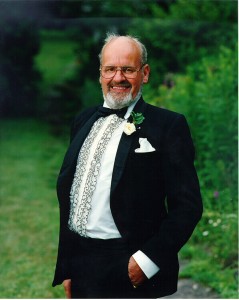 My poor dad- he always getting himself into trouble. He was overweight, and my mother would nag him to leave the cream out of his coffee. As an automatic response, he would mischievously pick up the carton of cream while her back was turned and empty it into his coffee with an impish smile on his face.

The smile literally was knocked off his face when he was on vacation with my mum on an island called Lanzarote off the coast of Africa. He was walking along the beach, paddling in the water while huge surf was pounding ashore. He was watching the waves and taking evasive steps up the beach anytime he saw big waves. My mum, walking on the dry sand nearby shouted to him to get away from the water.

My dad, with his automatic stubborn reaction, somehow decided to rile her up by going a few feet closer to the waves. A split second later in a moment of lack of concentration, the “wave of all waves” towered towards the beach and crashed over his head, knocking him off his feet. It would be great to be able to say that he learned his lesson and gave my mum a good laugh; however, when the wave was knocking the breath out of him, his full set of false teeth shot out into the surf to be lost forever. Have you ever heard an angry man complaining without any teeth?

He spent the whole vacation toothless and speaking like a cartoon character. He could not eat anything with more texture than puree, and he could not effectively talk to people and tell stories. These were one of his favorite pastimes. Talk about getting himself into trouble! My mum still gets angry when she tells this story. My childhood memories of arguments they had while tuning out the other person’s point of view still ring loudly in my ears.

Many years later, when old age hit my dad, he needed a hearing aid- but that did not help his listening skills. I would be half way through telling him a story, and occasionally I would see him put his hand to his ear to switch the bloody thing on. The frugal Irishman in him somehow gave him the logic that it was better to save the batteries than to hear what someone was saying.
My dad was a great man, but there were some character traits that infuriated our family – listening with respect and empathy was one of his shortfalls.

Having worked for nearly 30 years as an engineer, I realized that I am a “chip off the old block” with more than a touch of stubbornness, and I also have continued opportunities for improvement in my own listening skills. I sit in technical conflict meetings and instead of listening to someone’s point of view, my mind is working at 100 mph, focusing on my rebuttal. My other focus is on identifying when I can cut the other person’s conversation off and interject my point of view. Not a good success factor. It is something I need to continue to focus on improving.

The company I work for has an extensive library containing books, CDs, and DVDs, and I have used a set of CDs on listening skills several times in the last couple of years on my commute to work. I spend 90 minutes in my car commuting every day, and the library helps me upgrade my effectiveness as an employee without any impact to my personal or workplace time. The only issue I have with these CDs is that the audio presenter has the most monotonous, brain-numbing voice. Ironically, I would actually find myself tuning out the listening skills CD! Recently, I decided to change tactics. I did another search of the library and found a Steven Covey DVD on “Habit 5” (Listening Skills) of the Seven Basic Habits of Highly Effective People.

The DVD was about one and a half hours long, and I watched it over two lunch breaks. It was easy to watch and was very informational. The guidance was good for the office and good for the home. It also provided listening skill guidance for parents and teenagers. With two teenagers in the house, I realized the importance of listening with empathy if I want to maintain a healthy relationship with them. Another CD of Steven Covey’s that I have listened to recently is called “The 7 Habits for Managers” which also addresses listening skills from a leader’s point of view.

I have decided that these will be the learning tools for me to use as ongoing refresher training on listening skills. My company sees the value in providing tools to employees to upgrade their personal and professional development. The areas they provide tools for include leadership, management, communication skills, people and business skills, technical/functional skills, team development, computer skills etc. The library is just one of tools they provide, there are also many other opportunities for classroom training for those that prefer that. As someone who has a passion to learn, but limited spare time to invest, this library provides a no-cost, no-personal-time-lost means of developing myself.

What are the effects of bad listening skills in the workplace?
• People do not feel that their opinion is valued
• It is difficult to have a win-win negotiation
• Employees aim for win-destroy
• Emotions can come to the table, rather than beneficial discussions
• Employees can become apathetic
• Customers can feel alienated and go elsewhere
• Research shows that generally people only listen and mentally process 25% of what is being said

10 Ways to Maximize Listening Skills:
1. Make listening skills one of your core competencies. It is a vital skill for you to become an effective communicator. Understand that listening skills are difficult to learn and maintain, and need to be re-visited with refresher training.
2. Keep an eye out for employees who need additional coaching on listening skills. Do not allow them to fail due to a lack of communication skills.
3. Face to face meetings are typically the most beneficial. This allows you to be attentive, sit upright in your chair, lean in, make eye contact, smile, and use other visual techniques to convey to the other person that you are actively listening.
Give a clear indication that you are listening using techniques such as nodding your head, rubbing your chin, making “uh, huh” sounds, repeating back some summary information, asking questions, making comments
4. Keep contradictions out of your mind, as they significantly impede your level of listening.
5. Do not bring your emotions to the table, as it can deflect your thoughts and ability to listen and fully comprehend what they are saying.
6. Be respectful and build relationships that will set you up for success in future discussions and negotiations.
7. Put yourself in the other person’s shoes. Understand where they are coming from and what challenges they are dealing with
8. Minimize distractions- if there is distracting noise, move to a quieter place. If people are having side conversations, politely ask them to focus on the discussions at hand. Avoid the conversation going off on a distraction tangent.
9. Do not allow your focus to wander. Keep your thoughts tightly concentrated on the other person’s words, intonation, and the full picture of what they are trying to convey. Look out for signs of stress or anger. Arguments can develop from misunderstandings and emotional triggers.
10. Taking notes can help demonstrate that you are actively listening. Notes will also help you focus, summarize any key points, and help you recall any questions you may have.