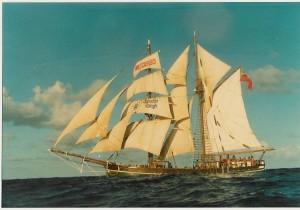 It was August, 1987, and I was working on a sail training ship called Zebu. Zebu had seven crew, and 15 young male and female sail trainees from all over the world. The trainees would join at three-month intervals. The ship could hold 13 sails, and there were approximately 150 lines (ropes) controlling the sails and the yard-arms (the horizontal wooden poles holding the square sails). The ship was on a four year round- the- world expedition as part of Operation Raleigh, and I was on board for a year travelling from Australia to the Caribbean via Africa. I was the engineer, the electrician, and also involved in sail training.

When I first joined the ship, I was very impressed with the professionalism of the crew and the focus on safety. We would have weekly man- overboard and firefighting training exercises. In addition to that – anytime an object such as a hat would blow overboard, we would put the rescue procedures into action and try to rescue it. On a motor ship you can do a figure- eight maneuver to rescue someone, but on a sailing ship, such a maneuver is not possible while under sail. You generally have to keep sailing and launch a rescue boat. During practice, the whole rescue operation could sometimes take over an hour.

When we were sailing around the Cape of Good Hope off of South Africa, the sail trainees had been on board for nearly three months. By then, they were excellent sailors. They knew all 150 lines by memory, even at nighttime, and most of them were fearless climbing 80 feet up the masts to furl sails, even during storms. It was winter in South Africa, and conditions were miserable on board, damp with freezing cold sea spray.

During the afternoon, there was a good wind and the captain put the trainees through their paces. They were directed to tack the ship backwards and forwards (zig-zag) through the wind with all sails up. This would require the trainees to work quickly to change the position of all 13 sails about every 15 minutes. When the ship was being worked hard, it was a most beautiful sight to see all the sails moving simultaneously. There was a natural flow to the motion, and the ship appeared to be waltzing on the waves.

Late that night, the wind continued to get stronger, and the captain who was on watch made a decision to reduce the sails to a minimum. Four of us were in our little below-deck hovel which contained bunk beds and a small table. We sat at the table telling stories in the dank humid space. Every time the ship rolled, we could hear the water rushing overhead on deck as the ship rolled and the side dipped deep into the water. I could see little drips of salt water falling onto my bunk. Up on deck, we could hear the sea shanties being sung energetically to help with the rhythm of pulling ropes. We could hear the loud rumbling of the square sails being furled (folded).

Imagine sail trainees 80 feet in the air standing on horizontal ropes with the yardarm at their waist. There they would try to capture the sails and furl them neatly, with the ship rolling heavily. We knew they would be having a tough time. Even though they were wearing simple waist safety harnesses, this was a dangerous operation. The procedure was that when ever you stepped on or off this foot rope, you shouted out what you were doing – “stepping on” – “stepping off” so the others could prepare to keep balanced.

Out on deck, we heard the chilling cry of, “MAN OVERBOARD“, followed a few seconds later by the sound of a flares exploding into the darkness. When I reached the deck, the captain was on the wheel trying to keep the ship in a straight line while floating flares and airborne flares were being set off one after the other. Half the people were standing on the deck, standing rigidly trying to maintain visual contact. They were pointing in the direction of the sail trainee as part of the procedure to ensure that we would not lose sight of him. The other half were frantically pulling on the pulley ropes to get the rescue boat into the water. By the time we got the boat in the water, the sail trainee had been in the cold black water for 15 minutes, and he was already far away on the horizon. The huge waves were making it hard to see him in the orange lights of the flares.

The rescue boat engine burst into life, and two of the crew went chasing after him. They were just a speck in the distance when they radioed back that they had found him. This was one of the most chilling nights of my life. A foot rope at the bow of the ship had broken before the sail trainee’s safety harness was clipped on. The chances of rescuing someone from a sailing vessel at night are very, very remote. Dedication to man-overboard training paid off.

What Can We Learn From This?
□ It is critical that we all strive to work in safe workplaces.
□ When guiding our kids towards a particular career or job, we can research to see how safe that industry or company is.
□ How serious does your workplace take safety training? Is it a token effort, or does it have value?
□ Are people actively pursuing better ways to deliver safety training so that there is ongoing value for it and retention of the information?
□ Do you take your safety training back home with you to help keep your family safe from dangers such as fire?

The story above had a positive outcome, but that is not what always happens. In my 28 years working as an engineer, I have been on the front lines of four fires, one explosion, and an incident where a friend got killed. People’s safety is the highest law, and we all play a significant part.