The Company Training Agenda Said; “Burn Them, Humiliate Them, And Scare Them To Death” 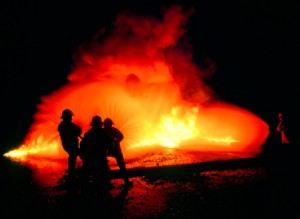 I spent 14 years of my life working on cargo and passenger ships as an engineering officer. During this time, I was involved in 4 major engine room fires and one explosion.

A fire on a ship is a very frightening experience; there is nowhere to run to and the last resort of taking to the lifeboats does not always provide much assurance of survival. There are no professional fire fighters, and there is no phoning for help. When there are accidents, you are forced to deal with them. Ships officers undergo three day fire fighting courses every few years.

In this article, I want to tell you about the fire fighting training that my fellow engineer officers and I received in Leith, Scotland, that helped us get through these incidents.

During these courses, the firemen try to teach you the reality of firefighting. They teach you that a real fire situation is nothing like the Hollywood movies. They teach the realities by putting you in situations where you are scared to death, and everyone gets some form of burns.

The course starts off with some classroom training where they teach you the mechanics of a fire. At this stage of the training, everyone is pretty jovial; put a group of ship engineering officers together, and you have a lot of jokes and story swapping about the unusual life at sea. After a day of classroom training, we progressed to running up the nine story tower with self contained breathing apparatus (SCBA) on. By the time we got to the top, we were fighting for our breath. My brain was telling me to take the mask off as I could not seem to suck in an adequate supply of air. A few people took their masks off and were forced to repeat this part of the training.

Next, the firemen took us into the lower floor of the six-story building, which was a simulation of a large metal ship’s engine room. The firemen were dressed up in their fire suits and had their SCBA’s on. A group of about 15 of us trainees stood in the room without any SCBA protection. In the middle of the room, there was a big pile of wood. The firemen lit it with a jar of kerosene and the doors were slammed shut trapping us.

The flames grew quickly. At first we were joking with each other, but soon the smoke and the heat started filling the room pushing down and down from the ceiling. We became totally focused on our breathing, adrenalin pumping, and brains getting focused on survival. One of the firemen in the room wearing his SCBA sarcastically shouted out, “You all have gone very quiet – what’s the matter?” Soon we were all lying flat on the ground – our mouths in the dirt sucking for air, our ears stinging with the heat. After a while, one of the firemen told us to keep our heads low on the ground.

We heard a fire hose belch out and water was going on the fire. The superheated steam produced by the water hitting the hot fire immediately hit us like a wave, and finished cooking our ears. The ears are one of the primary indicators that tell a fireman that it is getting too hot. The firemen kicked open the doors and we ran out coughing, spitting and retching – smoke coming out of our mouths for the first few breaths.

The next part of the training was search, rescue, and fire fighting using protective clothing, SCBA air tanks, and facemasks. This was to be a disaster from start to finish. The idea was that the engine room would have a large fire on the bottom floor – we would enter the top of the six-story engine room in a group of five wearing our SCBA. We had to manage a fire hose and a rescue rope to rescue a hidden dummy as well as put out the fire.

Firemen were hidden throughout the building, so that if anyone got injured or ran out of air they would throw the doors open and drag us out. When we entered the engine room, one by one holding the fire hose, it was like entering the gates of hell. Thick black smoke poured out, and the heat was already painful. You could only just see your hand if you put the flashlight on it. We were all breathing heavily with stress.

The procedure was that at each level of the engine room the last person on the hose would stay at an entrance to a room while the other four did a search for the dummy. The person at the entrance would sit with the hose clapping his hands shouting “door is over here” again and again so that we could stay oriented in the pitch black smoke filled building as we did our systematic search. Changing floors, you had to walk down backwards for safety, this is where we had our first mishap – someone’s breathing air bottle got stuck on something and in his panic to free it, he managed to rip the bottle from its screwed fitting.

The 3000-PSI of air in the bottle caused it to literally fly like a balloon with its end untied with the sound of an airplane taking off. The firemen quickly opened the doors and pulled us out. We had to start again.

The next incident involved me. I was on the end of the fire hose and we were preparing to go down a floor. The 4 people in front of me went down and I then let go of the fire hose, turned around and went down the stairway. At the bottom of the stairway I groped around for the hose but I couldn’t find it, not only that, I also could not find my teammates. I couldn’t understand it. What I did not know was that there were two stairways near each other.

When I let go of the hose I had turned around and climbed down the wrong stairway. I was lost. I came across a hidden fireman; I tapped him on his shoulder and muttered through my SCBA mask, “I have lost my friends”. The curses that came out of his Scottish mouth shouldn’t be repeated!

We eventually made it to the bottom floor with no sign of the dummy yet. We were all standing near a closed door in a line – hose in hand. Behind the door was a huge fire. I was just about to open it when a hidden fireman grabbed my hand and shouted out, “THINK BEFORE YOU OPEN THAT DOOR.” I had forgotten to get everyone to lie on the ground. They would have been badly burnt by the heat coming out the door. We lay down, opened the door, and started fighting the fire. While groping around the room trying to locate the dummy, someone shouted out, “I have found the dummy”, and we headed towards the voice. We were just ready to tie the rope around the dummy, when it shouted out in a Scottish accent, “Get off me you bastards!” We had mistaken a hidden fireman for the dummy.

By the time we found the dummy, the whistles on our air tanks were blowing telling us that we had only a few minutes of air left. We had six stories to climb to get out with the dummy, and we panicked. We brought the dummy out with the rescue rope tied… around its neck. The fireman gave us hell again.

I consider this training the best I have ever done in my life. It gave me a great respect for the difficulty of fire fighting, the danger of fire, and the complexity of rescue. The fire fighters at Leith Fire Fighting School in Scotland scared us, burnt us and humiliated us, but I have no doubt that they have saved many people from the horror of fire through their training. Over 20 years later, the training they gave me is still ingrained in my mind.