Ineffective Presenters – The Covert Erosion of the Bottom Line 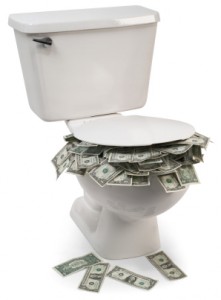 1) In 2007, I attended an Energy Technical Exchange Conference where about 900 people flew in from around the world.  The first presenter was a corporate safety manager, and he delivered a safety presentation with what seemed like 80 mind-punishing PowerPoint slides. The slides were overloaded with long sentences, wordy bullet points, and statistical data. He started his presentation by turning his back to the audience and reading it word for word in a monotone voice. His laser pointer guided us from word to word and he was so nervous that the laser dot shook as if an earthquake was underway.

Impact on his company’s bottom line: This was a $2,000,000+ conference and the word in the corridors was that people were not getting any value from it. The result of this was that the attendees did not go away with any new ideas that would help them work more safely or efficiently.

Impact on his company’s bottom line: His six conferences cost about $36,000+/year including travel, hotel, and conference fees.

3) An engineer was asked to present to the company executives on the need to spend millions of dollars on electrical system upgrades. His presentation was to last about one hour. A few weeks before the presentation he showed his slides to his boss to make sure he was on target. His boss saw the plethora of slides and said, “This meeting will not involve PowerPoint; we will use the information from about 10 of the 95 slides to make a handout and we will keep a few others aside in case they want additional details.” The engineer sighed and told his boss, “I have been working on these slides for months; this has been a huge waste of my time.”

Impact on his company’s bottom line: His initial presentation development effort wasted over 100 hours. Cost to the company could be in excess of $10,000. In addition, visualize what would have happened if the engineer had turned up to present his 95 PowerPoint slides. Picture his loss of credibility and the erosion of his future promotional prospects. Imagine the effects of his failure to successfully communicate the need to upgrade the electrical system. The electrical equipment could have huge production interruption potential in the event of a breakdown.

4) I was at a conference where an engineer was presenting on a technical subject to several hundred peers. He was a very knowledgeable engineer and was asked to speak based on his technical expertise. At the lectern, he clenched his notes in his hands. He was so nervous his notepaper was visibly shaking and his quavering voice gave a clear indication of the sheer terror and anxiety that he was going through. He confided with me afterwards that his hands were shaking so much that he could not read his notes.

Impact on his company’s bottom line: The engineer said he would never present to his peers again. Even when I suggested that he join a public speaking club to better manage his anxiety, he just looked at me and reiterated, “Never again.” The company lost a resource for critical knowledge transfer.

5) Visualize a management meeting where about 50 people have flown in from all over North America to discuss and gain consensus on a major change going on in the company. The conference room is full and absorbs the sound. There is no microphone and the average age of the people is between 50 and 60 years old. A few people have hearing aids. The presenters are unable to project their voices to the back of the room. Frustration levels build especially since some presenters mutter rather than talking. Questions are asked by attendees at the front of the room that people behind cannot hear. The presenter does not repeat the question back to the audience so that they would understand what the question or concern was about.

Impact on the company’s bottom line: This meeting may have cost in the region of $250,000 not to mention the loss of productivity due to attendees being away from their normal work.

WHAT CAN WE LEARN FROM THIS?

WHAT CAN WE DO ABOUT THIS?