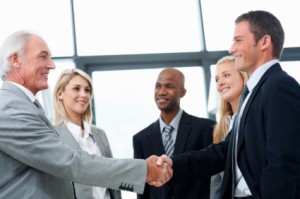 One of the most unusual stories I have heard regarding Leading With Humor was at a technology exchange conference. A senior executive did the opening keynote. During his speech he emphasized the need to take risks, to push the barriers of technology, and to make the incredible credible. He stated that this will unfortunately result in some mishaps. He went on to say that for any leading edge technology firm to excel, risks must be taken, and mistakes need to be tolerated.

He then told three anecdotes that depicted some of the errors he had made during his career. At the end of each vignette he took a raw egg out of his pocket, put it on the palm of his hand, and smashed it on his forehead to symbolize “egg on his face”.

Presentation skills excellence in the business world includes delivering information in a format that will convince people to agree and act. What sometimes gets forgotten is the need to incorporate a tone in the room that will enhance your ability to succeed. The following are two examples where executives capitalized on the utilization of levity:

1) An acquaintance was asked to travel to the corporate office to present to senior executives. They wanted him to explain why he needed to spend $75 million on specific equipment upgrades. His allotted presentation time was to be about 1 hour. He told me that he spent a lot of time on the presentation and initially developed over 100 PowerPoint slides! After coaching he understood what the content of his presentation should contain and that all he needed was about 10 slides (some other slides would be available as back-up slides if they needed additional details).

I met my acquaintance the evening after his presentation and he was glowing with success. His presentation went extremely well and he was successful in convincing them of the need to upgrade the aging equipment.

He confessed that about 15 minutes before his presentation, he became very nervous. He stated that he only relaxed when one of the executives started off the conversation with some witty remarks.

This example of an executive literally leading with lighthearted humor, led to a more relaxed and open communication.

2) Another example of an executive using lighthearted humor to set the stage for cordial communication was at a technical engineering meeting that I attended. Highly technical and opinionated engineers had flown in from all around the world to decide what research programs would be funded the next year. There was nearly $1 million available for the research; however it would only be enough to fund a few of the projects. There would be presentations outlining the benefits of each of the research programs. Following the presentations, the technical experts would be wheeling and dealing to make sure funding votes went towards programs that would benefit their specific needs.

Before the meeting started, the president of the research company asked the 50 + attendees to introduce themselves, and also had an unusual request. He asked that everyone disclose what their first ever job was. As people introduced themselves, they talked about being dish washers in restaurants, farm hands, landscapers, and there was also a notable trend that the Irish worked in pubs before going to college! The atmosphere in the room became somewhat lighthearted, and this simple icebreaker exercise identified common and humble grounding amongst the group.

If you are presenting or if someone is presenting to you, think about the things you can do to relax the atmosphere and encourage cordial interaction amongst the participants.