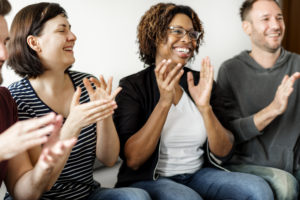 In this lesson, you’ll learn to:

According to a Robert Half International survey, 91% of executives agree that a sense of humor is important for career advancement, 84% believed that people with a good sense of humor do a better job. A Bell Leadership study revealed that the two most desirable traits in a leader were a strong work ethic and a healthy sense of humor.

It’s no secret that successful communication in the business world includes convincing people to agree and act. It all starts with creating a tone in the room that enhances candor, participation, and collaboration.

If you are presenting, or if someone is presenting to you, think about how you can calm the atmosphere and encourage cordial interaction among the participants.

Before we get into these in more detail let’s watch a brief video where we discuss some of the applications:

Icebreakers are a great way to get people more comfortable with each other– quickly! If you keep them fun and lighthearted, a little humor almost always comes out to play.

Here’s an example from a technical engineering meeting that I attended: Highly technical and opinionated engineers had flown in from around the world to decide what research programs would be funded the next year, and everyone knew there wasn’t enough money to go around.  After giving their presentations, the technical experts would be “wheeling and dealing” to get funding votes for the programs that would benefit their needs.

Before the meeting started, the president of the research company had an unusual request of the 50 or so attendees. All were asked to introduce themselves and describe their first job.  People talked about being dishwashers in restaurants, farm hands, and landscapers.  (Among the Irish, there was a notable trend of having worked in pubs before college!) This simple icebreaker, which identified common ground and humble beginnings that were often funny and relatable, caused the attendees to relax a bit. Pressure was lowered, and the presentations went smoothly.

Leading with Humor and Using Self-Deprecation

A great example of leading with humor happened at a technology exchange conference.   A senior executive, in the opening keynote, emphasized the need to take risks, push the barriers of technology and make the incredible credible.  For any leading-edge technology firm to excel, he said, risks had to be taken and mistakes tolerated.

To illustrate, he told three anecdotes about errors he had made during his career.  At the end of each story, he took a raw egg out of his pocket, put it on the palm of his hand, and smashed it on his forehead—giving the audience the ultimate visual of “egg on his face.” Opening the conference in this way, and adding in a little self-deprecation, illustrated his message and made him more relatable to the audience.

You don’t have to wait for a big speaking event to use these concepts. They can be used in everyday business communication! Watch the following video to see a few examples of how I used humor when conducting a safety audit in South America! (Bonus Tip: Watch my use of pauses, accents, and body language when telling stories. We’ll get to that in later lessons!)

Lesson tags: Business Communication, humor, lightheartedness
Back to: Finding the Funny: How to Create and Deliver Humor in any Speech or Presentation