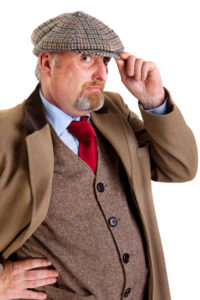 In this lesson, you learn to:

Using dialogue and accents for storytelling is highly effective…but why is it crucial from a humor perspective? Many of the lessons on humor require the audience to have crystal clear images of what is happening in the story or humor set-up. The most effective strategy is to develop and deliver your story in a manner where they feel they are “right there, witnessing the event.”

When the audience is immersed in your story in the present-tense, they get to relive it with you. Here is an example of changing a story segment from the “past-tense” to the “present-tense.”

Back in 1980, my brother and I went to a comedy club in England when tensions were high between the Irish and English. We were sitting in the front row. The comedian asked if there were any Irish in the audience, and my dim-witted brother waved his arm. I remember the comedian smiling as he promised that there would not be any Irish jokes to maintain peace and harmony. He then started off on a series of jokes that caused the mainly English audience to erupt into laughter. The first joked started off with a Frenchman called Patrick Murphy walking into a bar.

Picture my brother and I sitting in the front row of a comedy club in England. It’s 1980 and tensions are high between the Irish and English. The comedian asks, “Any Irish in the audience?” My dim-witted brother waves his arm as the comedian smiles and says, ”In the interest of peace and harmony between the English and the Irish, there will be no Irish jokes tonight.” Moments later, the mainly English audience erupts into laughter as the comedian starts off…“A Frenchman went into a bar…his name was Patrick Murphy!”

Benefits of using dialogue and accents include:

You may want to review this video a second time to understand what I could do to enhance the effectiveness. There are always opportunities for improvement, and that is what I love about the humor development process.

Here are some opportunities that come to mind for me:

Here is a short video where I demonstrate English, Scottish, and Irish accents while telling a funny story. 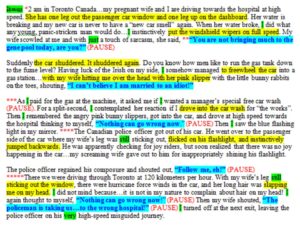 How to Use Dialogue Effectively in Stories

Download the attached editable PDF and change the story from the past-tense to the present-tense.

Scroll down in the document to see my present-tense edited version. Mine will no doubt be somewhat different from yours however the point of the exercise is to: