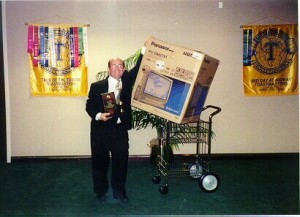 It was May 2000, and I was in the final of a speech competition. In front of me was an audience of over 200 people. My speech was humorous; however, I was trying to make a subtle point to people about limiting the amount of TV they watch and doing more family fun stuff.

To drive my point home with a little additional humor I went….a little crazy! I decided I would end my speech by having a huge TV box filled with pots and pans sitting in a shopping cart. On top of the TV box was an abundance of talcum powder.

My thoughts were to jokingly tell the audience to bring their TV sets to the front door and dump them onto the curb. I would then push the shopping cart to the edge of the stage and let the TV box tumble out and roll towards them. The pots and pans would create a frightful noise and the talcum power would create a visual cloud, and simulate the “TV” breaking inside the box. I would then deliver my serious closing line. That was the plan…..here is how it played out:

I pushed the shopping cart at high speed towards the edge of the stage; the TV was ejected and rolled, and rolled, and rolled, until it hit an audience member (a competition judge). The amount of talcum powder I used was excessive (understatement of the year) and as the TV rolled it produced a huge mushroom cloud that travelled into the audience. Some of the audience members were coughing and spluttering with the talcum powder cloud, and the remaining audience members were laughing out loud at the unplanned mayhem. I tried to deliver the last line of my speech with seriousness and sincerity; however with the audience laughing, I lost it and broke down laughing while spluttering my words.

I did not place in that speech competition, and reflecting back I concede that hitting a judge and causing him to cry out in pain may have lost me some points!

Having said that, props can be a great asset to a speech or presentation- as long as they are used appropriately. The following are some thoughts on using props:

Why use a prop?

Some examples of props I have used are:• I once used a table saw as a prop for practicing safety. I told people how I had an accident with a table saw because I did not follow the safety rules. I started up the table saw. There was noise, a big sharp blade and saw dust flying everywhere.
• In a speech about Ireland, I had a dish towel with a map of Ireland showing its mountains and rivers. As I talked about the different places people were hopefully able to visualize the scenery I was trying to describe.
• In a speech about pubs in Ireland, I poured out a glass of Guinness and held it as I described the tranquil atmosphere in some of my favorite pubs.
• In a speech about the importance of changing batteries in smoke detectors, I brought a smoke detector and asked everyone what it was. When they said it was a smoke detector I threw it against the wall saying that it was a useless piece of plastic since it did not have a good battery. At the end I had large photographs of burning houses to make my final point. Dave talking about courage with Larry the Lobster

The two main techniques of using props include display & rehearsal

DISPLAY
a. In most cases you may want to keep the prop hidden until you are ready to use it. This gives more emphasis. When you show the prop it can provide more emphasis if you pause immediately after showing it.
b. In a competition several years ago, I had a prop that was hidden by a table cloth. The prop was an ironing board. I was explaining what stupid gifts I had given to my wife. I described my wife ripping open the package on Valentines Day to see that I had given her an (PAUSE) —- ironing board.
c. Make sure your props are in a good location – easy to access and visible to the audience. Do not turn your back to the audience while retrieving your props.
d. Do not use props that you have to spend a lot of time arranging. This can interrupt the flow of your speech.
e. Do not let a prop interfere with the audience’s view of the speaker.
f. Make sure that your prop is big enough for the audience to see

REHEARSAL
a. It is important that you practice using your props.
b. Timing is very important.
c. Make sure the room can accommodate your prop
d. Is there a table to put your prop on?
e. Is there a hiding place for your prop?
f. If your prop is hidden by a cloth or other wrapping, can it be removed easily without distracting rustling noises?
g. If the room is long, or wide can the audience see your prop?
h. Practice enough so that you know what can go wrong.

Here are the mistakes I have seen or done:
a. Turning my back on the audience as I went to retrieve my hidden props.
b. Talking with my back turned as I went to get my props.
c. Prop was too small for the size of the room and was probably distracting.
d. A speaker putting a scarf prop around her neck and the lavaliere (lapel) microphone gave a loud scratching noise.
e. Using party poppers at the end of a presentation to create excitement. The finale of the speech was for all the audience to set off the gun powder filled poppers. We were in a 700 person corporate office with smoke detectors in the room – that is what is known in the speaking industry as a career limiting prop!
f. My Ireland map dish towel was in front of the audio speaker. When I went to point out a place on the map I got very loud microphone feedback. I will never do that again!

Final Note:
a) The prop movement should be smooth. Make sure it is not moved so fast that it confuses the audience and they are unsure of the purpose of it.
b) The prop should not be a distraction to the other parts of a presentation where it provides no value (e.g. if I did not hide my live lobster prop after I used it, the audience might stay focused on it rather than me.