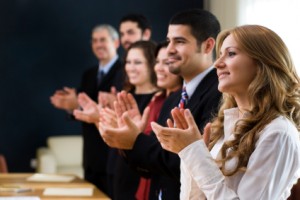 Picture yourself as a speaker who is standing in front of an audience of 100 people and getting a loud and energetic standing ovation. The incredible thing is that you have not spoken a word yet. What has just happened?

I witnessed this scenario in May of 2011 at a National Speakers Association North Texas (NSANT) monthly meeting. The speaker, Tim Durkin (http://www.timdurkin.com), had crafted an introduction that would work well with this specific audience. He wrote it out, honed it, and gave it to Susan Gatton (http://www.scgatton.com) a few days before the event. Susan had been selected to introduce him. She had practiced the introduction so that it would flow well, and the result was illuminating. It is exhilarating to see a masterpiece introduction. It did not just get the audience energized and curious about what the speaker was going to bring to the podium, it let the audience know that the speaker has a sense of humor.

Success strategies for this introduction:

To see a 4 minute video of Susan and Tim in action, go to: http://www.youtube.com/watch?v=YN9bFii3_oY.

For more information on successful introductions, please see an article I wrote in 2009 at: http://davehillspeaks.wordpress.com/2009/11/18/attention-grabbing-presentation-skills-%e2%80%93-your-speech-introduction-%e2%80%93-%e2%80%9cturning-up-to-play-with-the-wolves/.

The text of the introduction is as follows:

How would you like to have the opportunity to introduce a speaker who has, among other accomplishments?

Spoken on every continent except Antarctica.

Had dinner with four presidents and has met a host of world leaders including, Mother Teresa, Nelson Mandela, Gandhi and His Holiness the Dalai Lama.

Who is a scratch golfer, a gourmet cook, and raced an Indy car at speeds in excess of 225 MPH?

Who was drafted by the Boston Bruins National Hockey League team at the age of 14 and also was part of the Detroit Tigers organization in 1968, the year they won the World Series?

Who graduated near the top of his class from Stanford and turned down a Rhodes Scholarship to study at Oxford in order to start his first of eleven successful companies.

Who has successfully brought down four of Africa’s Big Five game animals in only two safaris.

Who went out with the lovely Vanna White on two dates and then never called her again.

Tim is not a doctor, MD or PhD, not an attorney, not a CPA, CPAE or MBA.  He is however a Notary Public and he just found out this week that he is a finalist for this year’s Publishers Clearing House Sweepstakes!

He went to and graduated from a large midwestern, state, university where he graduated in that half of the class that made the top half possible.

He hasn’t dated any model or traveled all that much, but recently subscribed to both National Geographic and Playboy magazine’s so he could at least see pictures of places he has no hope of visiting in person.

He has also seen pictures of not only the last four presidents but every one of them…as well as pictures of Gandhi, Nelson Mandela, Mother Teresa, and the Dalai Lama.

Ladies and gentleman, I am pleased to introduce the “the most average man in the world”  Tim Durkin!