RE-ENGINEER YOUR COMMUNICATION STRATEGIES – HOW MY REVENGE WENT SOUR 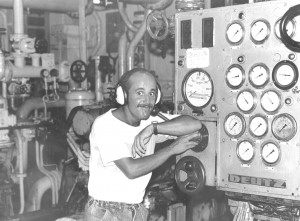 It was my first job, working in the engine room of a worldwide cargo ship as a junior engineering officer.  I was in trouble.  The English engineer officer that I worked with on shift, 3rd officer Neil had it “in for me”.  I am not sure if his aggressiveness was an English-Irish cultural thing or that I was an inexperienced engineer that did not meet his expectations.

I was a small town Irish kid that grew up in a supportive environment, and did not know how to handle someone who was slowly but surely eroding my self-confidence and my self-esteem.  For the first time in my life, I was questioning my worth.  Then I cracked.  My anger built up from biting my lip to planning revenge.

Neil was just finishing reassembling a huge air compressor the size of a small car, and was getting ready to do a test run.  An air compressor that size has an element of danger, a bearing too tight, a piston ring installed wrong could cause the machine to self-destruct and throw projectiles.

Neil approached the start button with caution, hiding his body behind the metal structure post to provide protect him from potential danger.  Unknown to him, I had been watching with revenge in my eyes.  I was hidden not too far away, and in my hands, I had the largest sledgehammer on the ship – affectionately called “The Animal”.

The scene seemed to go in slow motion – Neil’s face went white, his eyes bulged with fear, his instinct caused him to immediately drop on the floor and roll away from the machine.  It was a perfectly orchestrated maneuver except for the fact that as he was rolling, his eyes caught sight of my bright-eyed laughing face while holding “The Animal” over my shoulder.

In another perfectly orchestrated maneuver he was on his feet chasing me and shouting at me, “For God’s sake Hill – you are an officer. Officers do not behave like that!”  After the voyage was over several months later, I never saw Neil again.  This was not a proud time of my life; I still had a lot of learning to do, and I ended up leaving this company in order to get promotions.

View a 2 ½ min. video of Dave telling this Story at an American Society of Mechanical Engineers (ASME) banquet: http://youtu.be/Aa8y0vG6w6U

What Can We Learn From This?

As an engineer of over 30 years, I have grown to learn that conflict is a natural part of working with people. I have also grown to learn the importance of dealing with conflict rather than living with it. Differences of opinion, different motivations, emotional conflict, misunderstanding, ignorance, manipulation and prejudice are just a few of the aspects that can “light the fuse” of conflict.  If not managed appropriately a workplace can be eroded to ineffectiveness. What are some of the devastating effects that can result to a workplace?

Here is what a previous boss wrote about me in a performance review many years later when I was working in a corporate office. It is a testimonial to the effort I had made to re-engineer my communication strategies:

“Dave is a master of using his sense of humor to diffuse tension.  When he is around, the atmosphere becomes more friendly and cooperative.  He always sees the humor in things, helping to avoid or defuse difficult situations”.