What Do You Do When Workplace Violence Rears its Ugly Head? 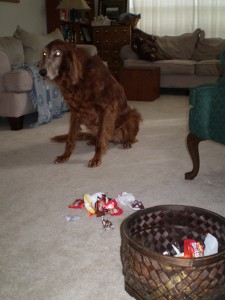 This is our dog Megan. She has anger management issues. Our family life is kept hectic- transporting kids to activities such as soccer games and practices, music lessons, etc. There are days when we rush home to grab some high speed food and then dash out the door again. Our dog, Megan, follows us around the house putting on her “pretty face”- puppy eyes, ears pricking up, and a goofy smile just to entice us to love her so much that we will take her for a long walk.

As we rush out the door, we say goodbye to her, and you can see the bitter disappointment in her face. We return a few hours later to find the contents of a waste paper basket strewn all over the floor. She looks at us sheepishly with guilt written all over her face. She does not make eye contact when we reprimand her and call her a “Garbage Dog”.

I often wonder what goes on in her mind once we leave the house. Does she get animated and verbally angry? “I hate this family, I sit here all day waiting for them to come home and take me for a walk and they just come home to taunt me. Why do they bother to come home if they don’t want to go for a walk? I bet they are out there walking some other dog. I hate them, I hate them so much. I am so angry; I am going to show them who is the boss in this house. I am going to throw the garbage. Dirty tissues, candy wrappers and other nasty stuff – that will teach them a lesson. Oh no, what have I done, they will never forgive me…”

The dog throwing the garbage is a frequent demonstration of aggression. I would like to be able to say that all acts of aggression that have crossed my path are laughable and tolerable; however, that is not the case. I have been on the receiving end of workplace verbal aggression that humiliated me and sucked the energy out of me, but most importantly, I have witnessed the end of someone’s career when physical violence came into the scene.

It was Christmas day, December 25th, 1981, and I was on a cargo ship in the middle of the Pacific Ocean. Christmas, the season of good will, was about to unravel at the seams and result in an engineer officer getting sacked. There were personality conflicts between some of the senior officers and the junior officers, and “pushing buttons” to get a reaction was the game at hand. An engineer cadet mischievously took a bite out of the 2nd Mate’s (deck officer) sandwich without asking as he was out of the room. He got rebuked and jostled by the 3rd engineer officer, which caused the 6th engineer officer to react violently and beat up the 3rd engineer. With emotions in the room flaring, the scene progressed when the 2nd deck officer came back into the room to find a fight scene just finishing, and a part of his sandwich missing. With anger, he shouted at the 6th engineer, “If you hit me that will be the end of your career.” That’s when the 6th engineer officer hit him in the face, and the 2nd mate fell down, concussed. Merry Christmas, all. The 6th engineer was sacked when the ship got into port a few weeks later. It most likely ended his career.

To this day, I still wonder how a good engineer could end up getting sacked over a sandwich. How did the personality conflicts deteriorate and get so out of hand? How and why did physical violence invade the workplace?

What Can We Learn From This?
As an engineer of nearly 30 years, I have grown to learn that conflict is a natural part of working with people. I have also grown to learn the importance of dealing with conflict, rather than living with it. Differences of opinion, different motivations, emotional conflicts, misunderstandings, ignorance, manipulation, and prejudice are just a few of the aspects that can “light the fuse” of a conflict. If not managed appropriately, conflict can potentially escalate to violence. What are some of the devastating effects that can result from conflict in the workplace?
• Loss of respect and trust
• Employees setting each up for failure
• A culture of doing the minimum
• Increased turnover of valued employees
• Loss of profits
• Energy levels and creativity are sucked out of the workplace
• Deadlines get missed
• Teams that are not cohesive become inefficient

Ten Ways Exceptional Workplaces Handle Worker Conflict and Violence
1. Train people at all levels of the organization in conflict management, negotiation skills, and listening skills
2. Deal with conflict right away, rather than having it fester in the background
3. Have zero tolerance for violence
4. Hire people with exceptional communication skills and impeccable ethics
5. Do thorough background checks when hiring
6. Address unresolved conflicts efficiently and effectively through workplace resources and have a policy and a process that is flexible enough to cover different scenarios
7. Develop a culture of respect and trust, and have a workplace that embraces diversity
8. Energize and empower employees.
9. Create a workplace with an aura of balanced fun-energy. Levity can help derail conflict in the heat of the moment.
10. Evoke an open-door culture where employees will speak up when they identify that conflict is not getting resolved, or if they have a concern that it may escalate to violence

Further information on this subject can be found at www.fbi.gov/publications/violence.pdf